As a building owner, there are many factors that should go into the final decision for your next roofing system. And, one of those factors is deciding on your roofing project’s commercial roof color.

The color of your commercial roof isn’t merely about aesthetics. Choosing between a white roof and a black roof membrane (or paint) can have a substantial effect on your bottom line, as well as extend the life-cycle of your roof system.

Correctly colored commercial roofs absorb or reflect heat, aiding in heating and cooling costs and improving the energy efficiency of your building.

Read on to learn more in our quick and easy guide.

The benefits associated with changing your commercial roof color are two-fold; first, you’ll reduce the strain on your wallet, and second, you’ll reduce stress on the environment.

The environmental effect of roof color was reviewed in a study conducted by the Cool Roof Rating Council (CRRC), aimed to “lessen the intensity of extreme heat events and save lives during such events” in the Boston and Chicago areas. Likewise, if the same study was conducted with warm roofs in colder climates, the researchers would likely come to a similar conclusion with black roofs.

Essentially, choosing the right color roof for your specific climate allows you to take an active role in regulating your building’s ability to heat and cool itself effectively.

How does roof color affect the system’s ability to heat and cool the property?

Let’s take a quick look at analyses of both white roofs and black roofs with commercial building applications in mind.

As mentioned above, white roofs cool buildings by reflecting the sun’s energy. White roofing systems are typically made from TPO or PVC and installed as a flat roof, but are also available in other options (like commercial metal roofing).

These types of commercial roofs are commonly known as “cool roofs” because they reflect light, limiting the energy your building absorbs from solar energy. A white roof is typically only 20 degrees hotter than the air around it, and these roofing systems are especially popular in cities where urban heat island effects are an issue.

Buildings in colder climates benefit the least from white roof coverings, because the sun’s energy reflects off the building and the central heating system isn’t supported as it tries to heat the building.

White roofs in colder climates may also encourage the accumulation of snow and ice. Because white commercial roofs don’t heat up as quickly, the snow may last longer on the rooftop.

While white roofs can still benefit buildings in cooler climates, it’s important to discuss your needs and desired outcomes with a knowledgeable commercial roofing professional before making an investment in this type of system.

Often, in areas with more warm days than cooler days, cooling a building is more common than heating it. To that end, white roofs are often recommended when needing to keep a building cool, and the benefits of a white roof in these applications should be immediate and obvious.

Black commercial roofs have excellent solar heating properties, allowing them to absorb energy and then translate that energy through the building. Black commercial roofs are typically made from rubber or EPDM roofing materials and are known as “warm roofs” (for good reason)! Aptly named, a building’s black membrane (a.k.a. warm roof) can be nearly 100 degrees hotter than the surrounding air temperature on a hot day!

However, just like white roofs, a black roofing system’s impact is lessened if the roof gets extremely dirty and isn’t well-maintained.

Often, black EPDM roofs are a good choice for colder climates. But, depending on the slope of your roof and the location of your building, a commercial roofing contractor may have a variety of other suggestions for roofing solutions that will fit your individual needs.

While they’ve been used for decades, black roofs may be losing ground when compared to white roofing systems when being installed in warmer climates. Why? Because black roofs can increase cooling expenses, and can add to urban heat island effects in highly populated areas.

Other Commercial Building Factors To Consider

There are other factors that you need to consider when choosing the color you want to go with for your roofing system. Those reasons include:

These important factors, along with your region’s typical weather patterns, lay the groundwork for deciding which roofing system is best for your building (which includes the color)!

Get an Expert Opinion on Your Commercial Roof Color

Now that you know a little more about the pros and cons of black and white roof membranes and coatings, it’s time to reach out to a contractor that can provide all the information and know-how to make the most informed decision for your commercial property.

Whether you’re considering EPDM, TPO or a metal roof for your building, we’re here to help. We’ll take a comprehensive look at your building, your local area’s climate, possible energy savings and more when recommending a new roof. TEMA is proud to be your trusted, experienced commercial roofing contractor partner, and we’re ready to answer your commercial roof color questions and discuss options. Reach out today. 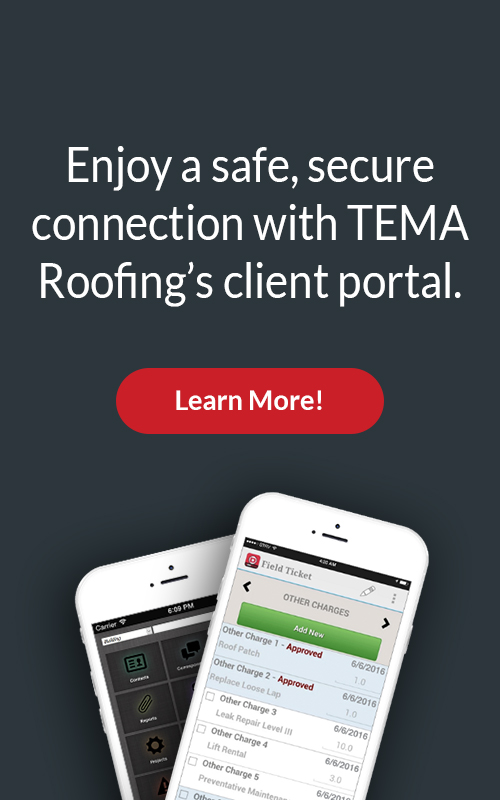 TEMA Roofing Services is proud to be the only commercial roofing company in the Youngstown, OH area that has the ability to contract with The Interlocal Purchasing System (TIPS) and OMNIA Partners cooperative purchasing organizations.
LEARN MORE

Meet Bid Requirements & Get Back to Pre-COVID Operations With Cooperative...

How Can Cooperative Purchasing Impact the Quality & Delivery Speed of Your...
Scroll to top

This site uses cookies. By continuing to browse the site, you are agreeing to our use of cookies.

We may request cookies to be set on your device. We use cookies to let us know when you visit our websites, how you interact with us, to enrich your user experience, and to customize your relationship with our website.

Click on the different category headings to find out more. You can also change some of your preferences. Note that blocking some types of cookies may impact your experience on our websites and the services we are able to offer.

These cookies are strictly necessary to provide you with services available through our website and to use some of its features.

Because these cookies are strictly necessary to deliver the website, refuseing them will have impact how our site functions. You always can block or delete cookies by changing your browser settings and force blocking all cookies on this website. But this will always prompt you to accept/refuse cookies when revisiting our site.

We fully respect if you want to refuse cookies but to avoid asking you again and again kindly allow us to store a cookie for that. You are free to opt out any time or opt in for other cookies to get a better experience. If you refuse cookies we will remove all set cookies in our domain.

We provide you with a list of stored cookies on your computer in our domain so you can check what we stored. Due to security reasons we are not able to show or modify cookies from other domains. You can check these in your browser security settings.

We also use different external services like Google Webfonts, Google Maps, and external Video providers. Since these providers may collect personal data like your IP address we allow you to block them here. Please be aware that this might heavily reduce the functionality and appearance of our site. Changes will take effect once you reload the page.